Appearing in four States for surrogacy

Appearing in four States for surrogacy

Although I and my associate Karen Gough have obtained surrogacy parentage orders in New South Wales in the past, this was the first time I had gone to court there. The reason is that in NSW surrogacy parentage orders are normally made in chambers. That means the documents are forwarded to the court. A judge then looks at the documents in his or her office, called chambers, and the orders are then made. The reason this time was different was because, for the first time the Supreme Court gave us a choice. I was told that we could have the orders made in chambers or we could have an appearance. Choosing the latter would also speed up the process.

By having a court appearance would mean that my clients would come face to face with the justice system- with a judge beaming down, approving of them as parents. It is truly a beautiful process. Judges have told me that making surrogacy parentage orders is the highlight of their weak, because it is joyful, unlike most of the rest of their work.

So it was a no brainer! We were going to court.

I have previously appeared in courts in Queensland, Victoria and South Australia. I have obtained surrogacy parentage orders in all four States. I have not blogged pictures of most, because laws generally prohibit publication- in order to protect the privacy of all concerned, especially the child. In this case the judge ordered that cameras could be taken into the court room, and Claudia, Sonny, Antonietta and Joe all consented to their details and that of Luciano being published.

I have acted in surrogacy matters for clients from all eight States and Territories and, at last count, 19 overseas countries: 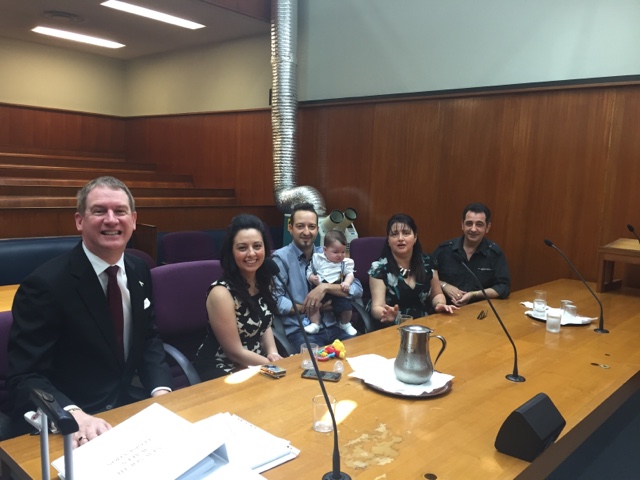