I was privileged to attend the launch just over a week ago in Sydney of a book- Designer Baby- by Aaron Elias Brunsdon. It tells the intimate story of Aaron and fashion designer Jayson Brunsdon and how they went to Thailand for surrogacy, and then got caught up in the hysteria following the Baby Gammy… Read More »Custom Single Post Header

I was privileged to attend the launch just over a week ago in Sydney of a book- Designer Baby- by Aaron Elias Brunsdon. It tells the intimate story of Aaron and fashion designer Jayson Brunsdon and how they went to Thailand for surrogacy, and then got caught up in the hysteria following the Baby Gammy saga.

Aaron said that he invited me because when they got stuck in Thailand, my blog helped keep them sane – and was the light at the end of the tunnel. My blog inspired them.

The book is a great read. Here is an extract of the book, published by Impact Press, and available outside Australia through Simon and Schuster:

More couples are given hell at Bangkok Airport and forbidden from taking surrogate babies from the country without the damn court order. It is frightening.

One couple flatly refuse a demand to sign a letter at the airport. The letter contains an admission that their baby wasn’t the result of any surrogacy arrangement, when in fact it was. Not signing means a return trip to the hotel until they can find a new exit strategy. But they are smart not to have signed the letter, which could have led to a conviction for human trafficking.

Another couple escape to Singapore, where they spend a few days before returning home. They are missed at the busy airport because they part ways at check in. Smart move! It is a close call, though. Cases keep pouring in, receiving night-time coverage on Today-Tonight, with other current affairs shows and TV documentaries also showing struggling couples on the wire. We watch the couples’ attempts to leave Thailand, sadness and grief overshadowing the supposedly joyous time as they battle with Thai authorities.

One such Australian couple brings me to tears. The couple and their newborn twins aren’t allowed through the airport security checkpoint because the customs officials are waiting for the surrogate to arrive so she can verify the exit permit was bona fide. The surrogate is running late, stuck in Bangkok traffic. The flight gets closer and closer to taking off. Finally the biological mother is allowed past customs’ watchful eyes but she witnesses in anguish her husband and their crying twins waiting on the other side for the surrogate. Not knowing what to do while her children cried inconsolably for her settling arms. Her poor husband haggles with the customs officials, showing them all the relevant paperwork. They disregard the screaming babies.

I dread the thought of our exit out of Bangkok. I personally wouldn’t know what to do if I was on one side of customs like the poor mother while Jayson and my baby got stuck on the other end, so I try not to think  about it. Let’s not jinx it.

There are also shows like SBS’s Insight, the Australian equivalent to BBC’s Hardtalk. A panel consisting of parents with babies born through surrogacy in Thailand and India, industry experts and advocates debate the topic of surrogacy.

One woman voices rather strong opinions, saying surrogacy goes against women’s fundamental rights. “It’s reproductive prostitution where basically women are turned into breeders when children are bought and sold.”

Another panellist, lawyer and surrogacy campaigner Stephen Page (my favourite blogger), who has helped many parents with surrogacy issues, says that although the law in some Australian states restrains people from engaging in commercial surrogacy, it is clear that hundreds are going down this road and no one is being prosecuted or penalised for their actions. “Why is the law in place then?” He presumes it is to prevent exploitation of women overseas. “But if you’re not serious about prosecution, why not get rid of it completely? It’s just crazy wanting to turn people who want to be parents into criminals, ” he chastises. 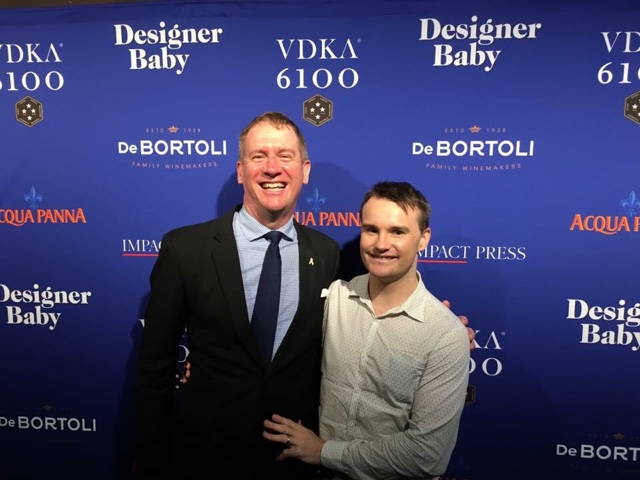 At the book launch with my husband Mitchell
Things to Read, Watch & Listen