How Australia’s vote for equal marriage was shouted out LOUD in Cambodia!

On 8 December my husband Mitch and I were in Phnom Penh. We stayed at the iconic Hotel Cambodiana, attending the ILGA (International Gay, Lesbian, Bisexual, Trans and Intersex Association) Asia conference. We were there because I was helping spread the word about the Asia Pacific Rainbow Families Forum, of which I was a founding… Read More »Custom Single Post Header

How Australia’s vote for equal marriage was shouted out LOUD in Cambodia! 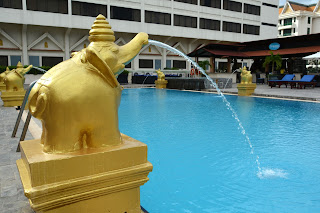 On 8 December my husband Mitch and I were in Phnom Penh. We stayed at the iconic Hotel Cambodiana, attending the ILGA (International Gay, Lesbian, Bisexual, Trans and Intersex Association) Asia conference.

We were there because I was helping spread the word about the Asia Pacific Rainbow Families Forum, of which I was a founding member.  The forum is for and about, surprise, surprise, rainbow families who hail from the Asia Pacific.

Phnom Penh was 3 hours behind Canberra. On that day, I was avidly following tweets of Aussie journalist Lane Sainty who was reporting live from Parliament House in Canberra.

As the day wore on, I discovered that the wifi at the hotel wasn’t very good- so I put my phone on to roaming. OUCH! But I was not going to let the significance of the day escape me.

Imagine for a minute. I am at a conference full of LGBTI activists from across Asia at the critical time that the issue of equal marriage laws were being voted on in Australia.

As the day progressed, my excitement increased, until I realised that there was only one vote to go. Then history might be made. We were about to break for lunch, when in the session I was in I grabbed the microphone and told everyone present that the vote will happen anytime now, and come to join us in the foyer for pictures to be taken of this historic moment. Excitement in the room.

Then nothing. For some no doubt worthy Parliamentary reason that last vote took forever. It seemed as though everything fizzled out. Downstairs we went. It was time for lunch.

In the meantime, I kept looking at my phone. I was with Mitch in the hotel dining room with say a couple of hundred others- some attending the conference, others attending other conferences.

Then I checked my phone. The news came through. The vote had passed. Equal marriage had finally arrived. Our marriage and that of many others was now going to be recognised in Australia. I said to Mitch: “It’s happened!”

I then jumped in the air, punching the air with both fists: “Yes!” I have never jumped so high, been so excited or yelled so loud- at least according to Mitch. I did it again, and again, and again- about a dozen times. I felt incredibly energised.

Suddenly the entire dining room reacted. Everyone got to their feet., even those who were not attending the ILGA Asia conference.  People came from upstairs wondering what the noise (me) was all about. People in the dining room clapped and cheered. Lots came over to be with us and have selfies taken at this historic time.

Later we drank champagne and had our pictures taken of such an amazing event. But in the meantime, we celebrated with everyone there- that Australia had at last recognised equality for same sex couples- and if Australia could do so, then so could every other country.