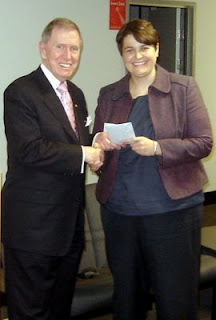 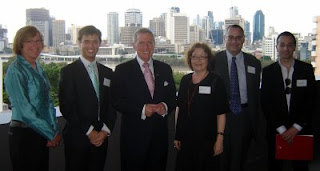 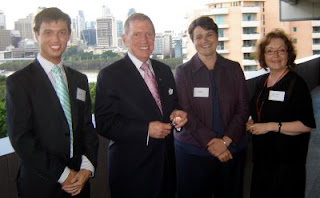 Last week I was lucky enough to attend the inaugural Justice Michael Kirby Award at Griffith Uni Law School.The first award of its kind in Australia was launched by the Griffith Law School with graduate Sally Robb taking out the honours. Griffith Law student Dean Jones was also a nominee.

Valued at $500, the award is open to all Griffith Law School students and alumni and aims to foster acceptance, diversity, inclusiveness, participation, tolerance and joy in relation to LGBTI issues.

The funding for the award and the subsequent academic discussion, was made possible by an anonymous donor, inspired by the speech that Justice Kirby gave at his opening of the 2002 International Gay Games in Sydney. The key words his Honour used then were:

At a time when there is so much fear and danger, anger and destruction, this
event represents an alternative vision struggling for the soul of humanity.
Acceptance. Diversity. Inclusiveness. Participation. Tolerance and joy. Ours is
the world of love, questing to find the common links that bind all people. We
are here because, whatever our sexuality, we believe that the days of exclusion
are numbered. In our world, everyone can find their place, where their human
rights and human dignity will be upheld.

Justice Michael Kirby, in attending and announcing the award, said he was delighted Griffith University had named the award after him, and:

Griffith is now one of Australia’s great teaching and research universities, but
has never forgotten the importance of diversity, humanity and good social
values.Diversity strengthens society and helps to make it creative and tolerant.
If we can build such a society in Australia, we will be a great example to the
world.

Justice Kirby said he hoped the award would promote idealism and optimism amongst law students. He was also delighted to be receiving an honorary doctorate in laws from Griffith in December.
Griffith Law School Dean Professor Paula Baron said the school was committed to improving social justice, diversity and inclusiveness:

The award demonstrates the Griffith Law School is committed to more than
just the rhetoric of diversity and inclusiveness but to the actual realisation
of these goals as part of our educational mission. The award recognises
individuals who have demonstrated a commitment to GLBTI issues through the
knowledge and skills acquired as part of their law studies and their broader
involvement with the GLBTI community.

After the award ceremony, there was a presentation by four academics from Griffith, Sydney, the UK and NZ about such diverse topics as:

I had the privilege of meeting nominee Dean Jones (but unfortunately not the other nominees or Sally Robb). In the next couple of days I will be publishing Dean’s paper on the blog.