Here are some highlights:

Representation for survivors of violence

I think it is essential that victims of violence have ready access to properly trained and appropriately remunerated specialist Family Court lawyers so that applications and accompanying documentation are presented in their best form. I have not the least doubt that applicants who bring their applications personally and endeavour to handwrite their evidence in often difficult circumstances, may miss vital points and make it that much more difficult for a Judge to properly grant the application. Although most applications brought without notice, succeed, of the percentage that are directed to proceed on notice, it will often be because of poorly presented documentation and more importantly, a failure to present threshold evidence justifying a “without notice” order.

Self-representation or legal representation.
The application process including the extent of the order.
Advise that the respondent will see the application and affidavits and be given a chance to be heard in court. Supply an application package with pamphlets on law, support programmes, timeframes, list of lawyers, legal aid services and community law centres.
Establish a safety plan to complement the order, including where to go for support, what is to happen that night, particular attention on time of service.
Referrals to be made with permission of the victim, to agencies such as WINZ, Housing New Zealand, Women’s Refuge, Child Youth and Family Services, Police, Community Law Centre and a Victim Advisor in the Criminal Court (if there are criminal proceedings).
Advise on the possibility of counselling through the Family Court (s9, Family Proceedings Act).
Establish whether the applicant wishes to be informed when the respondent has completed the programme.
If the applicant is self-represented, and as a result of this meeting, the applicant wishes to be legally represented, then I think the State has a duty to provide free legal representation if it can be seen that the applicant cannot afford to pay for a lawyer and most cannot.

I believe that the Family Court will often be assisted by receiving a complete criminal history of a respondent to a protection order, especially when the Court is exercising a discretion as to whether to continue the protection order, or not. At present, information that the Family Court can receive is limited to the charge or conviction relevant to the protection order. Past convictions for domestic violence and against other victims may be highly relevant and yet not accessible. Equally, convictions for drug use, particularly methamphetamine, can be highly relevant and influential. 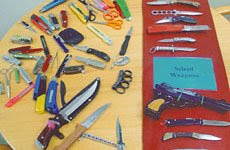 This is particularly significant when statistics routinely compiled by the Ministry of Justice on security incidents are evaluated. In the year June 2007 to May 2008, 414,082 searches were conducted nationally and 4,231 items were either seized or taken into temporary custody. To give an indication of the nature of the problem here, I set out for you, in photographic form, items seized in one week in March 2008, in the Manukau Court (in Auckland).

The proposed legislative amendments to aid in the protection of domestic violence victims are intended to be more extensive than just revising the Domestic Violence Act. Proposals are also made to extend the definition of violence under the Care of Children Act 2004 to include psychological abuse as violence and the Court will be given discretion to appoint a lawyer-for-the-child in protection order proceedings where children are likely to be affected by any order. Children and young people aware of domestic violence have the right to be listened to and need help to understand what is happening.