Shannon Fentiman cuts the rainbow cake to celebrate the announcement! Photo: ABC With my husband Mitchell and my old clients Lea(l) and Julie Last Saturday I took part in an announcement by the Queensland Government- that it would seek to amend the Adoption Act so that same sex couples, singles and those undergoing IVF would… Read More »Custom Single Post Header 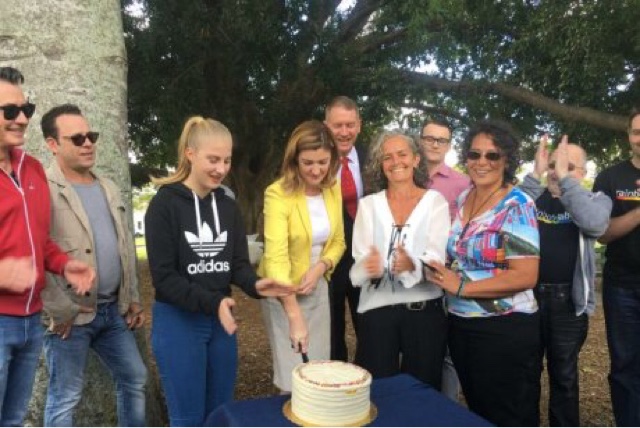 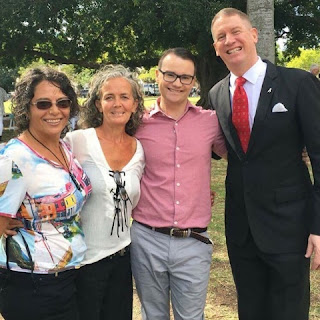 Last Saturday I took part in an announcement by the Queensland Government- that it would seek to amend the Adoption Act so that same sex couples, singles and those undergoing IVF would now be eligible to adopt. Communities Minister Shannon Fentiman said that the Government had undertaken a review of the Adoption Act in which a majority of the 350 submissions called for the removal of discrimination. She said that the Government would be seeking to put the Bill before the House later in August, with the intention of having the amendments passed by the end of the year.

The Bill would also repeal the offence of those seeking to find who their natural parents are.

I had been critical of the Bligh government’s Adoption Act, because it discriminated, and continues to discriminate.

I told the media that Australia had signed up to the International Convention on the Rights of the Child- which said that the best interests of the child were paramount. If we were serious about that, then we would assess each prospective adoptive parent on that test. After all, you don’t have to be in family law for very long to work out that sexuality is not the most important issue in raising a child- it is the quality of parenting provided by a child’s parents. Our courts unfortunately are full of cases where one or both of a child’s parents provide less than adequate care.

Old clients of mine, Julie and Lea, also spoke to the media. They had become guardians of their daughter, but had been unable to adopt because of their sexuality. Now hopefully if the changes are made, they will be able to adopt- which will be a much better outcome for their daughter, giving her stability and certainty.

If the changes in Queensland are made (hopefully with LNP support, or at least the LNP allows its members a conscience vote), then this means that Queensland will be in line with NSW, ACT, Tasmania, WA and now Victoria, and soon to be SA. Only the NT will be behind the times.