Suspect your Spouse is Cheating? Get a Parrot

Suspect your Spouse is Cheating? Get a Parrot. From the bizarre but true files… If I didn’t read about it in three different cases, I would have never believed it. Apparently over history, the pet parrot has been a key witness in proving unfaithfulness and abuse in marriage: November 19, 1937: According to the LA… Read More »Custom Single Post Header

Suspect your Spouse is Cheating? Get a Parrot 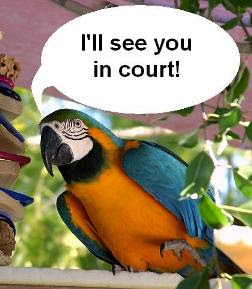 Suspect your Spouse is Cheating? Get a Parrot.

From the bizarre but true files…

If I didn’t read about it in three different cases, I would have never believed it. Apparently over history, the pet parrot has been a key witness in proving unfaithfulness and abuse in marriage:

November 19, 1937: According to the LA Times, Mr. James J. Reynolds wanted to put his parrot on the stand to testify concerning its knowledge of the domestic affairs of him and his wife by showing that the bird had learned to call Reynolds certain abusive names and that the bird’s teacher could have been none other than Mrs. Reynolds. Superior Judge Brand, however, refused to allow a parrot to testify declaring the procedure was a little too irregular in that the parrot probably could not be placed under oath and furthermore probably could not recall who had taught it anything it might have learned.”

November 28, 2005: Frank Ficker of Freiburg (try saying that five times straight) thought he had it all: successful wife, nice home, and a mistress on the side. But the family parrot, a pro at imitating Frank, spilled the beans on his cheating ways. That’s how Mrs. Ficker found out about her husband’s affair with a woman named Uta. “Hugo always liked to mimic Frank and he could do his voice perfectly,” said his wife. But one day Mrs. Ficker heard the bird repeating something she’d never heard before. “I heard him doing Frank’s voice, but saying ‘Uta, Uta,’” she said. According to DW-World, the unfamiliar word got the wife searching their house where she eventually came across two plane tickets to Paris, one for Frank, another for Uta (who was, evidently, the other woman.) “I kicked him straight out,” she said. “It’s just me and my parrot now.” Divorce proceedings are pending.

February 27, 2006: Argentina – Angry wife Rosella DeGambos got her blabbermouth parrot Bozo to testify in court, who then spilled all the family secrets within a two-hour appearance. “I knew he’d seen everything that my husband Carlos did when my back was turned,” Mrs. DeGambos said in an interview about her bizarre divorce court ploy. “And I knew he had the vocabulary to describe what he’d witnessed. According to Nature’s Corner, the parrot described three “pretty dollies” that Carlos had “tickled” while his wife was away. He also identified the women in photographs, calling them by their correct names. “I used to think that Carlos was a faithful husband but Bozo let me know about a year ago that something was up when I wasn’t home,” Mrs. DeGambos said. “He was using new words, words of love. And he began giggling in a high-pitched feminine voice. He kept saying, “No Carlos, not here,” and things like that. I knew if the lawyers could get him to testify, there was plenty of information they could get from him.” Shown one picture of the 23-year-old beautician Carlos allegedly wooed in his home, the bird shrieked, “Honeybun, I love you.” When Mrs. DeGambos’ attorney asked the bird, “Who loves Carlos?” the winged witness said, “Ruby loves Carlos, Ruby loves her baby.” Coincidently, Ruby is DeGambos’ young and voluptuous secretary. Judge Agusto, let Bozo’s testimony stand and granted the Mrs. her divorce. The first such ruling in the world.

Either way, it’ll be pretty easy to determine who gets to keep the parrot…