The Hague surrogacy project marches on…

For some years now I have written about the proposed Hague Convention on international surrogacy, for example through my role with the American Bar Association. An international convention has the potential to make the lot of intended parents considerably easier in transitioning from one country to another, but also has the potential to turn the… Read More »Custom Single Post Header

The Hague surrogacy project marches on…

For some years now I have written about the proposed Hague Convention on international surrogacy, for example through my role with the American Bar Association. An international convention has the potential to make the lot of intended parents considerably easier in transitioning from one country to another, but also has the potential to turn the journey into a nightmare.

I expressed concern in 2011 that the then model for a Convention being mooted by two UK academics (which was to conflate surrogacy with adoption) could have meant a disaster for Australian intended parents. After all, given our experiences with adoption as compared to surrogacy, who would want a process taken over by the Government, determining who can or can’t be parents, causing lots of agony and pain- and along with higher costs might result in intended parents waiting 8-12 years instead of 18 months to 2 years so that they can have the joy of becoming parents?

The Hague project is continuing to progress. In April The Hague Secretariat reported to member nations about progress. When I talk about The Hague, I am talking about The Hague Conference on Private International Law, an international body comprising member nations, who then sign conventions. Two well known examples are the Hague Intercountry Adoption Convention and the Hague Child Abduction Convention (the latter being particularly well known due to the Italian four sisters case that was played out in the Family Court and in the media).

“For example, one specialist Australian lawyer reported that he provided legal assistance in 2 incoming ISA cases in 2008, whilst in 2012 he dealt with 100 such cases, with this trend set to continue in 2013.”

What I found fascinating in the study and the summary commentary were some of the facts and figures. I have set some of these out below. Except where I have indicated I am the source of information, all information is from The Hague.

For a start, it seems that tiny Monaco bans ALL forms of assisted reproductive technology, but several countries, such as Thailand, a favourite for Australians undertaking surrogacy, have no regulation of ART at all: 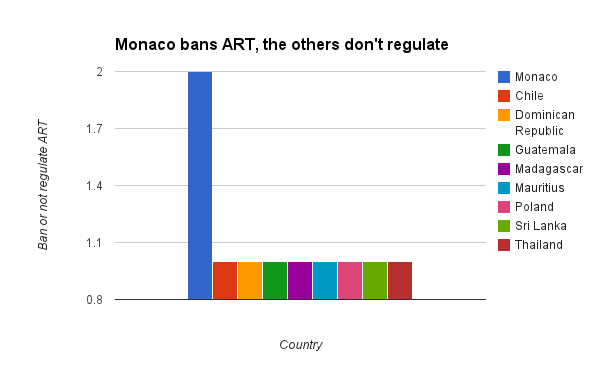 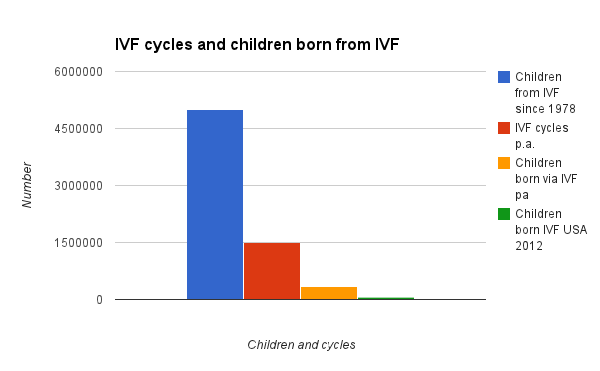 Countries have different views about whether a Hague Convention should be a priority: 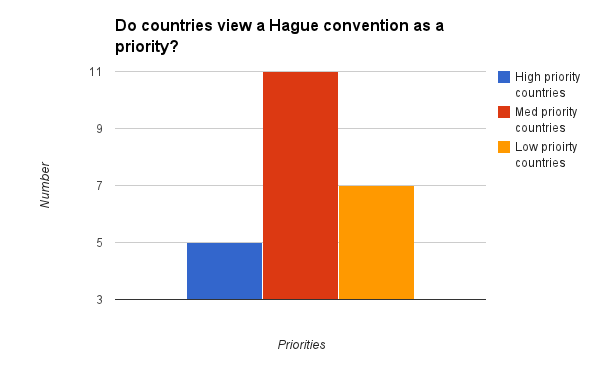 Significantly, the USA is opposed to there being a Hague Convention: 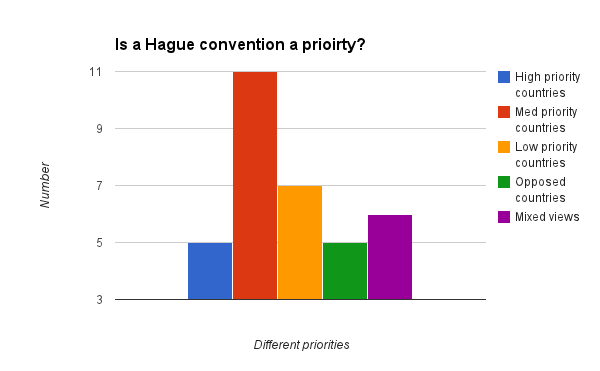 Although the numbers were very small and the numbers skewed somewhat through the responses received, it is interesting to see who is undertaking international surrogacy: 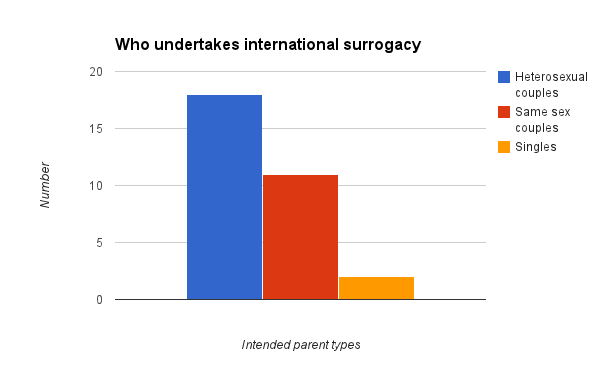 As you age, some countries impose limits on whether there will be treatment. The age of 45 appears to be significant: 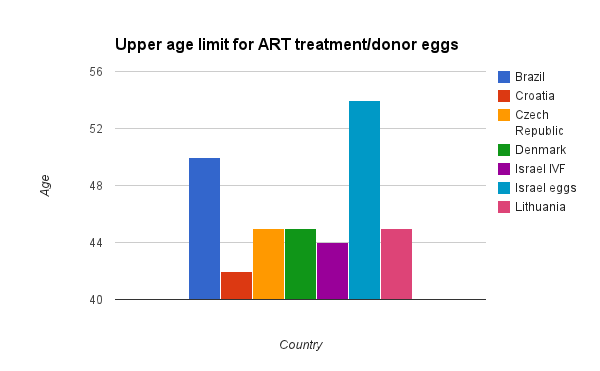 And then there are the costs:

The costs of egg donors varies widely. It was surprising that Indian egg donors are paid more than those from the Ukraine. 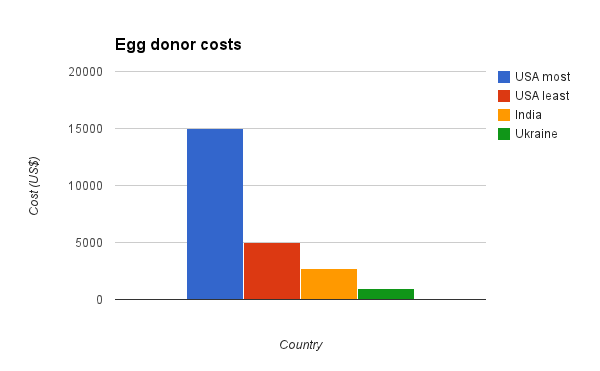 International legal surrogacy costs. The US/UK example is for UK clients who undertake surrogacy in the USA. 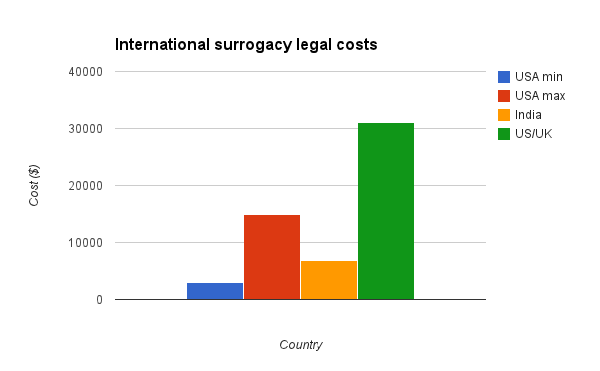 Medical costs. The Australian figures I have calculated at A$15,000 per IVF cycle, of which with luck there might only be one, but there could be three. There was one disastrous US case where the figure was off the dial (and which showed there were insurance issues)but generally US costs were comparative. 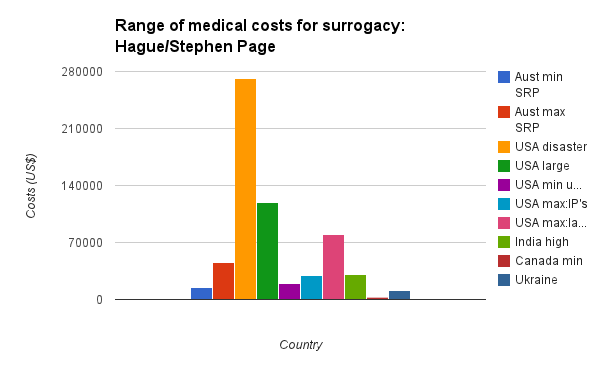 Agency fees: What is interesting about these fees is that the fees paid in India are considerably higher than those experienced by some parents in the USA. 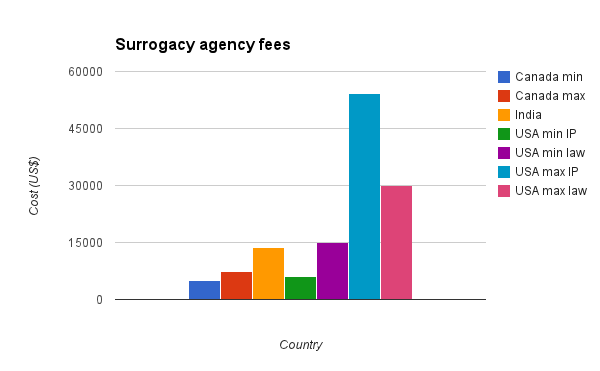 Fees to the surrogate (as opposed to her costs incurred). It was noted that the costs incurred by a surrogate in Canada for example were US$20,000. The average to pay surrogates in the US was over US$30,000. By contrast I have seen clients pay US surrogates between US$10,000 and $30,000. 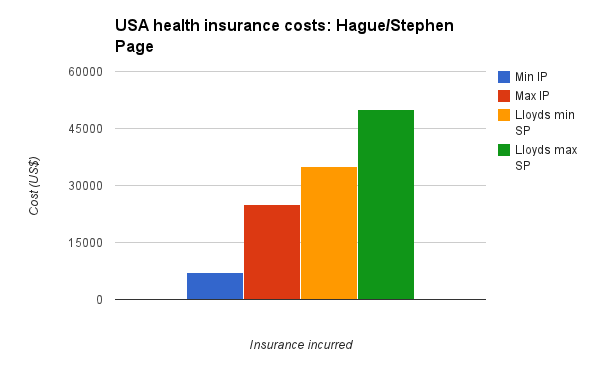 And finally the overall cost (which in each country can vary widely), and as can be seen varies between the experiences of lawyers and those  of intended parents. What is interesting is to see that India and Thailand are not as cheap as often believed, when compared to the US: 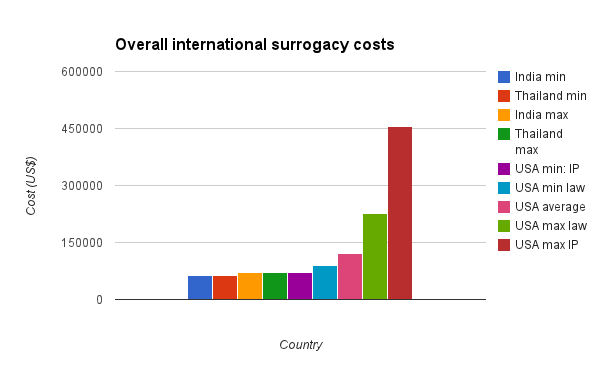