In the last couple of days, Washington DC sniper, John Allen Muhammed, was executed. Back in 2002 he and his accomplice 17 year old Lee Boyd Malvo drove around the streets of Washington randomly shooting at strangers. One of them would lie in the boot of the car firing out of the special modified boot… Read More »Custom Single Post Header

In the last couple of days, Washington DC sniper, John Allen Muhammed, was executed. Back in 2002 he and his accomplice 17 year old Lee Boyd Malvo drove around the streets of Washington randomly shooting at strangers. One of them would lie in the boot of the car firing out of the special modified boot lid at people doing ordinary everyday activities, such as filling the car with petrol, or going to the car wash.
Their actions terrorised Washington. For three weeks, no one was prepared to go out, of if they did they bobbed and ducked in order to avoid being shot. Tarps were put up at service stations to protect customers.
It is not known who drove and who shot, but Malvo received a life sentence, presumably because he was 17 at the time and led by Muhammed.
Now it appears that the reason all these killings occurred was because Muhammed was an obsessional violent ex, who had chased his wife from one side of the USA to the other, would not let her go and had threatened to kill her.
The theory goes that he always intended to kill her, but by killing complete strangers at random as well would be able to disguise his actions.
The theory is plausible. Many years ago I acted for a woman whose husband had been violent. She escaped him and obtained a protection order, which included a no-contact clause. She regularly complained to police that he had breached it, but police did little. His actions included standing outside his rental house, which just happened to be on her route to and from the children’s school, and being there at just the times that she would be driving past, and then waving to my client and the children. 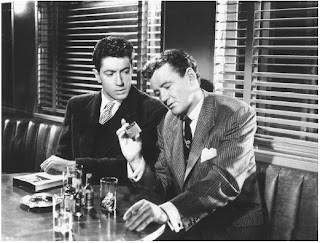 Hitchcock’s Strangers on a Train

My client remarried. There continued to be long standing litigation in the Family Court. He was unhappy that the children were not living with him, and thought that he had done nothing wrong. The police finally charged him with a breach of a protection order. He was enraged with this and was fearful that he might go to jail.
The husband then came up with a plot which has all the hallmarks of Hollywood, except that it was true. Through his criminal contacts, he asked a hitman to kill my client’s second husband. The plot was specific:

Thankfully the police were aware of the plot and the husband never followed through, but instead spent time in jail for offences relating to the plot.