On Friday night I spoke at the 6th anniversary of the LGBTI Legal Service in the ceremonial Banco  Court of the Supreme Court of Queensland. The court was packed, with about 200 in attendance, and many of the “great and the good” in the words of former High Court Justice Michael Kirby, who was the… Read More »Custom Single Post Header 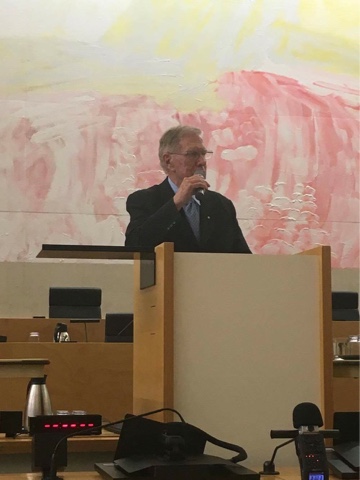 On Friday night I spoke at the 6th anniversary of the LGBTI Legal Service in the ceremonial Banco  Court of the Supreme Court of Queensland. The court was packed, with about 200 in attendance, and many of the “great and the good” in the words of former High Court Justice Michael Kirby, who was the guest of honour. Those in attendance included Queensland Chief Justice Catherine Holmes, President of the Queensland Court of Appeal Margaret McMurdo, Queensland Attorney-General Yvette D’Ath, other judges and politicians, lawyers and law students.

After a moving welcome to country by Uncle Sam Watson, who explained that what has been known since time of Captain Cook as Moreton Bay, has been to the local Jagera and Turrbal people as Qandamooka, proceedings were started by President Matilda Alexander.

Mr Kirby talked of his opposition to the plebiscite. He pointed out that a plebiscite was not required for the removal of the white Australia policy, the ability to have Aboriginal land rights or other controversial issues at the time dealing with the interests of minorities. Parliament just went ahead and did its job. He feared for the impact of the plebiscite on the mental health of LGBTI people, especially young LGBTI people, because of the possibility of damaging debate occuring during the whole process. However, he expected that we would muddle through it and get it right, eventually legislating for same sex marriage and removing other discrimination.

He also talked about how in his fight for civil rights back in the 60’s and 70’s gay rights were not talked about. He did not come out until much later- indeed not until he was a judge of the High Court. His being gay and having a gay partner was hidden, and it was only the determination of his partner Johan that resulted in Kirby telling the world, via Who’s Who, that he had a male partner and coming out.

A sad part of the speech was that there is no inevitability with the rise of gay rights. In Belize, a former British colony in central America, the Supreme Court has just held that the criminalisation of sodomy was against that country’s constitution, which might help change things in the other 17 former British colonies in the Caribbean- all of which criminalise sodomy. In other places, such as India, things are not looking so good.

So it is essential to remain vigilant!

He thanked the volunteers, both lawyers and non-lawyers, for their efforts with the service. I was mentioned for my international work with surrogacy and The Hague (as to a proposed international surrogacy convention) and Justice Forrest of the Family Court was singled out for praise as he had been in a previous life a particularly diligent and warmhearted associate to then Justice Kirby of the NSW Court of Appeal.

My speech to the ceremony is here: