I have commented before about witty and amusing names used as pseudonyms in cases under the Family Law Act, the most amusing being named after two race horses: Doriemus and Van Der Hum.   Those were the 80’s: Linda Evans (Krystle Carrington), John Forsythe (Blake Carrington) and Joan Collins (Alexis Carrington) in Dynasty The names… Read More »Custom Single Post Header

I have commented before about witty and amusing names used as pseudonyms in cases under the Family Law Act, the most amusing being named after two race horses: Doriemus and Van Der Hum. 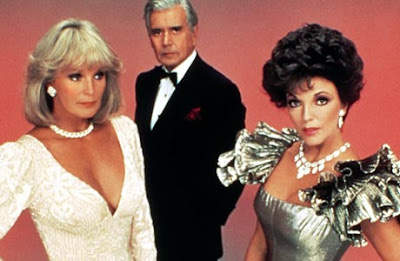 The names issue has come up again in the recent case of Carrington and Carrington. The Carringtons on TV were the over the top subject family in the top rating US soap Dynasty.  Blake Carrington, played by John Forsythe,  was married to Krystle Carrington (Linda Evans). The central character however was Blake’s scheming ex-wife Alexis Carrington (played by Joan Collins).

No doubt the name was chosen in this case was because it was unchallenged that during the marriage the husband had a relationship of up to 26 years with another woman, and that there was a child of that relationship aged 16. It appears that by the time of the trial that relationship had ended and the husband was now in another relationship. Justice Benjamin considered whether notice should have been given to the first woman because of the possibility of there having been a de facto relationship, but as that relationship ended before 1 March 2009, when the Family Law Act was amended to include de facto property claims, he decided against it.

Similarly, his Honour did not order notice to be given to the husband’s new partnerto be able to make a claim, as they had been together for less than the threshold time of 2 years.

It was widely claimed when the amendments came into force that they might allow mistresses to make claims. Last year Today interviewed me specifically about that issue.  His Honour’s views clearly show that the possibility of claims by mistresses cannot be discounted.