Today I had the privilege, along with our other solicitors at Harrington Family Lawyers,  of receiving inhouse training from Murray Howlett and Jennifer Veitch, both from chartered accountants Pilot Partners about the withholding tax regime that starts on Friday. Although it looks like a nightmare, their flowchart above simplifies the nightmare created by this red… Read More »Custom Single Post Header 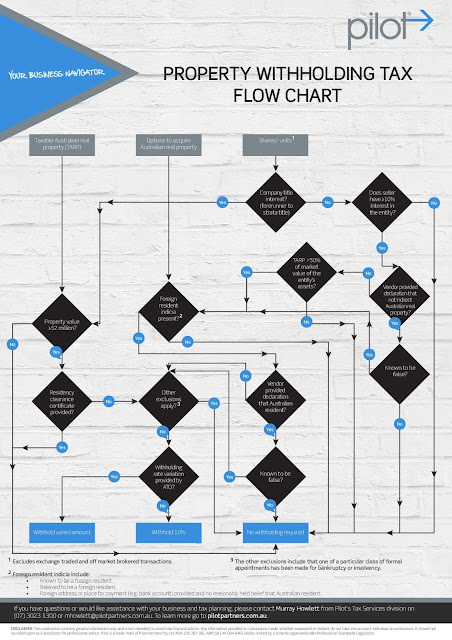 Today I had the privilege, along with our other solicitors at Harrington Family Lawyers,  of receiving inhouse training from Murray Howlett and Jennifer Veitch, both from chartered accountants Pilot Partners about the withholding tax regime that starts on Friday. Although it looks like a nightmare, their flowchart above simplifies the nightmare created by this red tape monster.

Their key message- if you need to get approval from the ATO- which you will need to do with every bit of real estate to be transferred over $2 million, do so as early as possible, so that you have the ATO’s certificate in hand for up to a year.

The process is supposed to be automated, and is bound to have delays, sooner or later. There are approximately 3 or 4 employees at the ATO devoted to issuing certificates- when the ATO estimates there will be 240,000 transactions a year. Or to put it another way- there are 5,000 transactions a week (assuming a 48 week year, allowing for leave entitlements), making each of the 4 employees (assuming there are 4 not 3) sign off on 1,250 transactions per week, or 250 per day. On a 37 hour week, that is 34 per hour, or just under 2 per minute.

The ATO estimates that turnaround time should be 14 days. I am not so optimistic.

One could imagine that if you are the vendor or indeed a husband in a property settlement and the house has a net value of over $2 million, you might be concerned by seeking the certificate if you have been behind in your taxes. I am sure the ATO will use this opportunity to engage in data matching and then say it wants the money, or it issues a garnishee notice, or it refuses to issue a certificate until money is paid to it.

For the person acquiring the property, if there has been a failure to withhold the right amount in the right way, there is potential for the ATO to come asking for more!

What is more, when there is a company or unit trust that has greater than 50% of the gross value of its assets are held in land (no matter the value) and 10% or more by value of the shares or units are to be transferred, no matter how they are to be transferred, it is wise to obtain a certificate declaring that the vendor is not a foreigner. Failure to do so might incur the acquirer a great big tax bill, penalties and interest from the ATO.

It is unclear yet what happens in the common or garden transfer from husband to wife (or vice versa) when their family home is worth more than $2 million. Say it is worth $2.4 million. The home is owned in half shares by each of the husband and wife. If the husband does not obtain the certificate from the ATO, the wife is obliged to retain 10% of the gross value- and pay that to the ATO, and not pay it to the husband.  It is unclear if the amount to be withheld is $120,000 (being 10% of the husband’s share) or $240,000 (being 10% of the total gross amount). The fact that there might be a $1 million mortgage over the property is irrelevant- the withholding tax is calculated on the gross, not the net value.

Lots of room for argument between lawyers. Lots of red tape and nightmare for anyone from now on.

Imagine there is a grazing property. The wife is transferring her interest to the husband. The station has been in the family forever, and he knows a thing or two about cattle. He couldn’t imagine not holding on to it. The property is worth $6 million. If she doesn’t supply the certificate in time, does he withhold $600,000 or $300,000? If the cost base is $2 million, does he withhold $200,000 or $100,000?

But – what if each of the titles is worth less than $2 million? Let’s say there are 7 titles, and each is not worth more than $1 million. Then no withholding tax may need to be held.

For distressed sellers, there can be variation certificates issued by the ATO to ensure that secured creditors don’t miss out. These can be applied for by the acquirer, the disposer, and by third parties, such as the bank that has security. One can see banks applying for these certificates as many times as needed.

The types of cases that are caught include:

We are at the beginning of a great big, costly red tape learning curve. Lucky us.

In this episode of the Page Provan, Family and Fertility Law Podcast, we turn the spotlight on Accredited Family Law Specialist and Multi-Award Winning Lawyer, Stephen Page.

The Need for a Safety Plan in Bad Relationships

In this video, Page Provan Fertility & Family Lawyers Director and Accredited Family Law Specialist, Stephen Page talks about your safety in bad relationships and making sure you have a safety plan in place.

Standing Up to Bullies

In this video, Page Provan Fertility & Family Lawyers Director and Accredited Family Law Specialist, Stephen Page shares insight on how to stand up to bullies.