Tomorrow marks the anniversary of White Ribbon
Day. In my first year as an elected senator for
Queensland I attended the White Ribbon Day function
in Parliament House, Canberra. As a proponent in
condemning violence against women I did not hesitate
in becoming an ambassador of White Ribbon Day.
As a husband of an amazing wife and as a father of
two beautiful girls, I could not consider anything more
important in making this choice.

White Ribbon Day was started in Canada in 1991
by a group of male students on the second anniversary
of the shooting of 14 female peers at the University
of Montreal. The White Ribbon Campaign is the
largest effort in the world of men working together
to end men’s violence against women. In the first
year, 100,000 ribbons were distributed to men across
Canada. Ten thousand white ribbons were distributed
in 2003 and today hundreds of thousands of white
ribbons are worn by men and women across Australia.
This includes men at work, in Australian police forces,
in national and local sporting associations, in the
media, in politics and in the defence forces, across
all our capital cities as well as in rural and regional
areas. The campaign continues to go from strength
to strength and now boasts more than 350 White
Ribbon ambassadors Australia-wide. There are also
an increasing number of events being held across the
country, and more organisations and individuals are
participating every year.

As a White Ribbon ambassador I started out this
year with an objective of recruiting more ambassadors,
and am happy to announce the successful recruitment
of two well-known Queensland men, Secretary of the
Australian Services Union, David Smith, and Mick
Gillam, Councillor for Moreton Bay Regional Council,
Division 8. Both David and Mick, who represent
many women in their respective positions, did not
hesitate in stepping up to the plate to take on the
responsibilities of a White Ribbon ambassador. David
and Mick join the Queensland list of White Ribbon
ambassadors along with our Prime Minister, Kevin
Rudd, Senator Joe Ludwig, other federal, state and
local council parliamentarians, union leaders, lawyers,
police, sporting leaders and many more professionals. 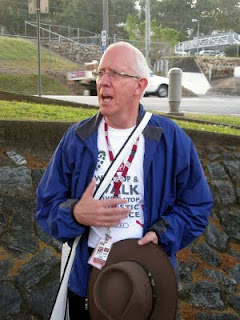 Later on that afternoon we did a similar presentation
at Queensland Rail Institute at the Queensland Rail
centre, Central Station, Brisbane. The event was
well attended, with many members of the Australian
Services Union; ASU Secretary, David Smith; and
the Queensland rail CEO, Lance Hockridge. I was
pleasantly surprised to hear in Lance’s address of his
involvement in the Queensland CEO Challenge, which
this year raised $25,000 towards this particular cause. 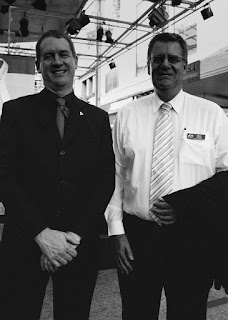 Senator Mark Furner and Stephen Page at Men in the Mall

Lastly we met at the event ‘Men in the Mall’
held at Queen Street Mall, central Brisbane. The
event was reasonably well attended, with guest
speakers including former Brisbane Bronco legend,
Steve Renouf, the 2009 Young Queenslander of the
Year, Chiu-Hing Chan; Assistant Commissioner, State
Crime Operations Command, Ross Barnett; and me
as an ambassador. During the proceedings the crowd
also received a presentation on self-protection by Ian
‘Powerhouse’ Jacobs, who did a live SAFE demo.
Additionally, a group of young Muslim men attended
the event.
I consider that my inspiration for this cause
commenced from my prior career as a union official,
providing many opportunities in defending women
who had unfortunately fallen victim to unnecessary
approaches by males in cases of workplace harassment
and sexual discrimination. In some of these cases
I was amazed that companies had not introduced
sexual harassment policies to make employees aware
of inappropriate conduct. Clearly in some cases there
was a lack of knowledge both by employers and
employees of their rights and responsibilities in the
workplace. After representation was made by the union
along with representatives from employees and the
employer, suitable policy would be implemented to
make all stakeholders aware of the issues concerning
sexual harassment in the workplace.
The statistics are profoundly disturbing, which
reflects a sad indictment of our society. The statistics
are that one in three women experience violence in
their relationship. That is 1,000 women each day—
1,000 today, 1,000 tomorrow, another 1,000 on the
next day and so on. Aboriginal women are significantly
more likely to be victims of violence than non-
Aboriginal women. In Queensland alone the police
handle more than 30,000 confirmed domestic violence
incidents each year. Domestic violence is a major cause
of death and disability in women aged 15 to 44.
Frightfully, most family and intimate violence goes
unreported. Surveys estimate that nine in 10 do not
report incidents of domestic violence. Yet over 30,000
children and young people accompany their mothers
to a refuge. If we take no action, an estimated
750,000 Australian women will report being a victim
of violence in 2021-22. Naturally, this type of violence
comes at a cost to our society. A 2009 KPMG study
estimated that, annually, domestic and family violence
costs Australia $13.6 billion.
Employers are in a strong position to assist survivors
of domestic and family violence to continue to work
safely. Employment and the economic security that
it provides can be critical when a survivor leaves
an abusive relationship and, more often than not,
their home. Domestic violence does not just affect
the individual; it also affects family members, both
immediate and external. A close friend is fighting the
demons as his daughter has for many years struggled
with this insidious scourge. My friend titled his story
Domestic violence—a father’s story and it reads as
follows:
The verbal abuse of my daughter by her husband started
on their honeymoon with him telling her she was too fat,
too lazy, ugly and dumb. This continued for two years;
completely demoralised her and made her think she was
worthless.
Then after the birth of two boys, he started dragging her
around the house by her hair and throwing her against the
wall. He then started kicking her out of the house with no
money and no clothes and no where to go. She slept in her
car because she was too ashamed to tell anybody.
He then started to isolate her from her friends and family
but the relationship with her family was too strong. He then
moved on to really belting her up even in front of his children.
Finally my daughter had had enough and she left and had him
charged with aggravated assault and had a domestic violence
order taken out against him for the boys and herself as well as
for me and my wife. He has also threatened to kill the boys.
We moved them into a unit in a secured town house complex
but she struggled with two boys and not enough money eventhough we helped her out. She moved back into the house
with her husband, but living separate lives. We are worried
that he will start hitting them again and this time it will be
worse. The domestic violence order is still in place and this
may help.
I felt so helpless during this marriage because I could not do
anything about it and only found out about it after five years
of their marriage. It has affected the two boys very badly. No
one should have to put up with this violence in a family life.
My daughter is five foot four tall and her husband is six foot
two.
It is signed off ‘Les’. Nicole Kidman, a goodwill
ambassador of the United Nations Development Fund
for Women recently told the American Congress that
violence against women and girls was perhaps the most
systematic and widespread human rights violation in
the world. If it is good enough for Nicole, it is good
enough for us males to take up the gauntlet. We must
not rest until violence against women is eliminated. We
all have mothers and some of us have wives, sisters,
daughters and nieces. We must ensure that they never
fall victim. I am fortunate to have all those and I love
them dearly. As males, we need to call on all males to
swear with me today to never be violent and never be
silent.
Things to Read, Watch & Listen