The United Nations On 17 December 1999 the United Nations adopted Resolution 54/134 designating 25 November as the International Day for the Elimination of Violence against Women. The General Assembly stated that it was: Concerned that violence against women is an obstacle to the achievement of equality, development and peace………and to the full implementation of… Read More »Custom Single Post Header

On 17 December 1999 the United Nations adopted Resolution 54/134 designating 25 November as the International Day for the Elimination of Violence against Women.

The General Assembly stated that it was:

History of the Day

Previously, 25 November was observed in Latin America and a growing number of other countries around the world as “International Day Against Violence Against Women”. With no standard title, it was also referred to as “No Violence Against Women Day” and the “Day to End Violence Against Women”. It was first declared by the first Feminist Encuentro for Latin America and the Caribbean held in Bogota, Colombia (18 to 21 July 1981). At that Encuentro women systematically denounced gender violence from domestic battery, to rape and sexual harassment, to state violence including torture and abuses of women political prisoners. The date was chosen to commemorate the lives of the Mirabal sisters. It originally marked the day that the three Mirabal sisters from the Dominican Republic were violently assassinated in 1960 during the Trujillo dictatorship (Rafael Trujillo 1930-1961). The day was used to pay tribute to the Mirabal sisters, as well as global recognition of gender violence. 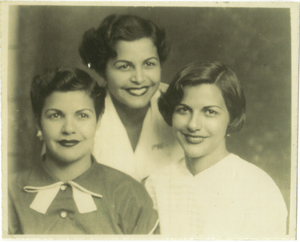 Today 25 November 2008 is White Ribbon Day, also declared by the UN as International Dat for the Elimination of Violence Against Women.
The Mirabal Sisters
The three sisters, Patria, Minerva, and Maria Teresa were born to Enrique Mirabal and Maria Mercedes Reyes (Chea) in 1924, 1927 and 1935 respectively in the Cibas region of the Dominican Republic. All three were educated in the Dominican Republic, Minerva and Maria Teresa going on to achieve university degrees.
All three sisters and their husbands became involved in activities against the Trujillo regime. The Mirabal sisters were political activists and highly visible symbols of resistance to Trujillo’s dictatorship. As a result, the sisters and their families were constantly persecuted for their outspoken as well as clandestine activities against the State. Over the course of their political activity, the women and their husbands were repeatedly imprisoned at different stages. Minerva herself was imprisoned on four occasions. Despite Trujillo’s persecution, the sisters still continued to actively participate in political activities against the leadership. In January 1960, Patria took charge of a meeting that eventually established the Clandestine Movement of 14 June 1960 of which all the sisters participated. When this plot against the tyranny failed, the sisters and their comrades in the Clandestine Resistance Movement were persecuted throughout the country.
In early November 1960, Trujillo declared that his two problems were the Church and the Mirabal sisters. On 25 November 1960, the sisters were assassinated in an “accident” as they were being driven to visit their husbands who were in prison. The accident caused much public outcry, and shocked and enraged the nation. The brutal assassination of the Mirabal sisters was one of the events that helped propel the anti-Trujillo movement, and within a year, the Trujillo dictatorship came to an end.

The sisters, referred to as the “Inolvidables Mariposas“, the “Unforgettable Butterflies” have become a symbol against victimization of women. They have become the symbol of both popular and feminist resistance. They have been commemorated in poems, songs and books. Their execution inspired a fictional account “In the Time of the Butterflies” on the young lives of the sisters written by Julia Alvarez. It describes their suffering and martyrdom in the last days of the Trujillo dictatorship. The memory of the Mirabal sisters and their struggle for freedom and respect for human rights for all has transformed them into symbols of dignity and inspiration. They are symbols against prejudice and stereotypes, and their lives raised the spirits of all those they encountered and later, after their death, not only those in the Dominican Republic but others around the world.

Sixteen Days of Activism Against Gender Violence Campaign
The 16 Days of Activism Against Gender Violence came out of the Global Campaign for Women’s Human Rights. In June 1991, the Centre for Women’s Global Leadership with participants of the first Women’s Global Institute on Women, Violence and Human Rights, a forum involving 23 women from 20 countries called for a global campaign of 16 Days of Activism Against Gender Violence. The campaign would highlight the connections between women, violence, and human rights from 25 November to 10 December 1991. The time period encompassed four significant dates: 25 November, the International Day Against Violence Against Women; 1 December, World AIDS Day; 6 December, the anniversary of the Montreal Massacre of 6 December 1989, when 14 women engineering students were gunned down for being feminists; and 10 December, Human Rights Day.